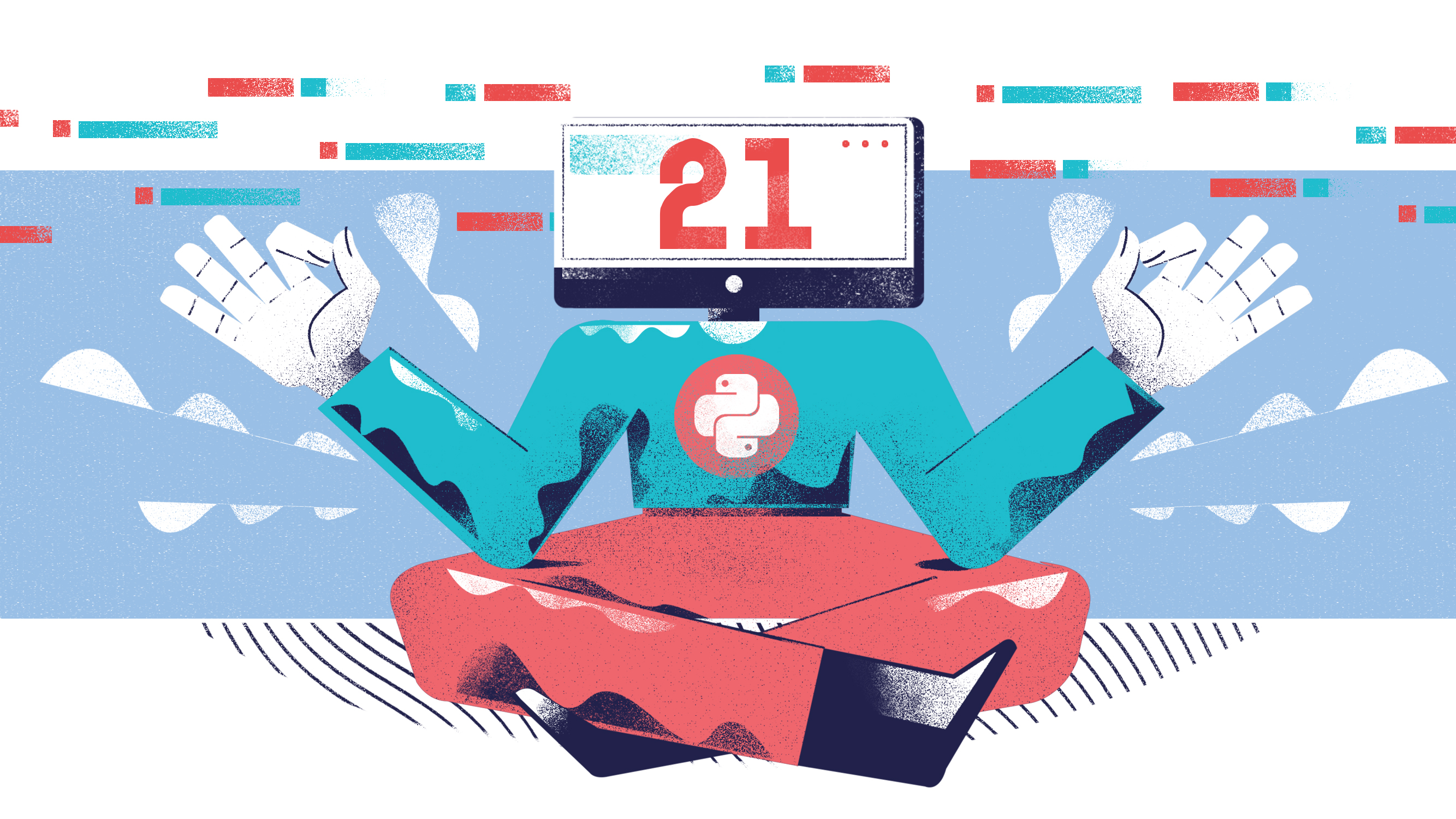 Welcome to day 21 of the 30 Days of Python series! Today we'll learn about how to (and why to) split our Python code into multiple files.

First though, we'll quickly recap how imports work in Python. Let's get started!

§Recap of imports in Python

Doing a quick recap is worthwhile in this case, because it's important we understand a few points before going off and creating lots of files for our programs!

If you'd like something a little more comprehensive, feel free to re-read the day 18 post where we first covered imports.

§Importing adds a name to globals()

If you have a Python file and you type this:

§Importing allows us to access elements of the imported module

We've accessed the pi name inside the math module. In this case, that is the value of the mathematical constant, pi.

You can use the `as` keyword to give the imported module a different name in your code. I don't recommend you do this, although you'll see it done every now and then!

You can also use * to add almost everything from a module to your global namespace. This can "pollute" the global namespace, filling it with variables. Most of the time, it's strongly discouraged.

§Why split your code into files?

Now that we've quickly recapped the topic of imports, let's talk about why we may want to split our code into multiple files!

The first question we get when we start discussing this is: "isn't it easier to keep the code in one file?".

After all, then you don't have to deal with imports!

Keeping your code in one file may make it easier to write (to begin with!), but as you write more, it'll make it much more difficult to read and modify.

In programming, readability and maintainability trump speed of writing any day!

§Separating concerns and ease of organization

When we separate code into files, it's important we have a reason for putting some code in a certain file. Usually, we go by concerns. Code that does one thing goes into one file, and code that does something different goes into a different file.

For example, we might have one file for user interaction (prints and inputs), and another file for data storage (saving and retrieving things from a file).

At the moment the different concerns of a Python application may not be obvious to you. That's normal! Over time, you'll learn more about this. With more experience, it'll become clearer when things will benefit from getting split into files.

Separating files by concerns, assuming we give the files good names, also helps us find code more easily. If you have two fils called data_storage.py and user_menu.py, you know what you're going to find in each!

Using files and folders also does wonders for organisation. You could put files related to working with different types of data storage into one folder, for example.

As your files grow, they start getting more difficult to read. You may have many functions and variables, and finding things may require a lot of scrolling.

Modern editors have features to make it easier to find where things are defined, but this isn't a perfect solution.

Splitting your code into multiple files is a great way to produce smaller, more focused files. Navigating theses smaller files will be easier and so will understanding the content of each of these files.

When you have multiple smaller, focused files, it's easier to reuse the contents of one file in multiple other files by importing.

It's also possible to have *too many* files! Don't aim to make your files as small as possible. Instead, make them focused.

If each file is concerned with one aspect of your application and every file has a good name, navigating your project will be easy!

Let's start off by going into a new Python project (or repl.it repl) and creating two files. Let's call them main.py and myfile.py.

Remember that repl.it will always run main.py when you press the "Run" button, as we mentioned in the day 0 post.

Because both files are in the same folder, you can import one from the other.

Let's type this in main.py:

Note that we don't import myfile.py, but just myfile. Python does the rest!

§What happens when you import

When we import a file, Python runs the file. It has to do that in order to determine what names exist in that file.

Then it makes that file available to us in main.py by putting a reference to the module in the global namespace.

Let's add something into myfile.py:

You'll see that we get two things printed out:

That's because the myfile.py file was executed. It contains a print call, so therefore Python printed stuff out!

Let's add something a little more realistic to myfile.py. Maybe something like this:

Now in main.py we can use the get_user_age function that we defined in myfile.py.

That's the gist of it: separate things into files, and import them!

Don't give your files the same names as built-in modules.

For example, if you create a new file and call it json.py, you'll get into trouble!

That's because if another file tries to import json, you won't be importing the built-in json module that lets us talk to JSON files. You'd be importing your json.py file instead!

Python always looks in the project folder for imports before looking at the built-in or installed packages.

§Your files work in the same way as modules

Everything we could do with external modules, we can do with our own files:

You can create folders for your files if you think that'll help with organisation. In my experience, it usually does.

For example, create a folder in your project called user_interactions and move myfile.py into it. Now your file/folder structure will look like this:

From main.py you now have to use slightly different syntax to import myfile.py:

In the example above, we're therefore importing myfile from inside user_interactions.

If you have multiple sub-folders, you will need to use multiple . to separate the different levels of folders and files, like this:

When you're importing like this, you'll either import specific things like we've done, or you'll use aliased imports. Either of these two are good (the first is generally better):

You normally won't be doing anything like in the example below, because it can get quite long to type out:

You need to refer to the complete import when you want to use something, so you'd be typing user_interactions.myfile a lot in your code!

It's OK to do that if you won't be using the file much though.

When we import a file, that file runs in "module mode".

At the moment our project structure is like this:

I'll delete the contents of both files, and I'll place this in myfile.py:

And I'll do this in main.py:

The file that we run always has a __name__ variable with a value of "__main__". That is simply how Python tells us that we ran that file.

Try moving things around and see how the output created by myfile.py changes!

§Running code only in script mode

Sometimes we want to include some code in a file, but we only want that code to run if we executed that file directly—and not if we imported the file.

We could type this in myfile.py:

That could allow us to run myfile.py (we can't do that in repl.it without some extra configuration), and see if the get_user_age() function works.

That is one of the key use cases of this construct: to help us see whether the stuff in a file works when we normally don't want it to run.

Another use case is for files which you don't normally run yourself. Sometimes you may write a file that is for use by another program, for example.

Using this construct would allow you to run your file for testing, while not affecting its functionality when it's imported by another program.

For today's (only) exercise, we're giving you a bunch of code that is all in one file.

Your task is to split that code into multiple files. You can choose how many and which files you want to split the code into, but think about why you're putting each piece on code in each file!

Then when you're done, check out our exercise solution to see how we'd split the code, and why.

For today's project, we'll be using a Python library to create some graphs! As part of this project, you'll have to structure your code well so that it doesn't become an unreadable mess.

Check out the project brief for more information on today's project.